Breath. Air taken into and exhaled out of the lungs. Something so effortless yet so multifaceted. Most of us breathe an average of 12-18 times a minute. That’s close to a thousand breaths an hour. If we are lucky, we may reach 700,000,000 breaths in a lifetime. Breathing is so simple that the body’s autonomic nervous system takes over when we forget. Tiny nerve cells in the brainstem automatically send signals to our intercostal muscles and diaphragm to contract and relax in consistency and cooperation. Breathing is vital for aerobic creatures such as humans. The body uses oxygen delivered through breath to break down food for energy. But breath is so much more than the delicate bodily service keeping us alive.

Everyone in a delivery room waits with nervous anticipation until they hear a newborn infant take her first breath and then wail as she forces air out of her lungs for the first time. Sometimes a friend’s “humph” or “sigh” (perhaps with rolling eyes) can convey an entire paragraph. Breath can also signal great loss when it ceases.

Think back to a difficult situation when you told yourself to “just breathe”. A stressful midterm. Mounting tensions with a coworker. The moments after a terrifying event when you are trying to right yourself. It’s simple, right? Just…. Breathe…… If only it were that easy. The simplicity of the command is outweighed by the looming shadow of anxieties driving the need to halt the racetrack of thoughts and emotions in our cerebral cortex. Breathing is more than drawing in oxygen-rich blood to nourish vital physiologic structures. Being able to breathe signifies our ability to calm the mind. So, what happens when the mind encounters a disconnect and loses the ability to tell our body to “just breathe”? In these intense moments, we may still be fulfilling the function of breathing, but trauma, stress, and anxiety can bombard the brain with a misfire of signals leading to activation of our “fight or flight” reflexes.

For Michael Streeter, years of mental and physical trauma began to manifest in the form of post-traumatic stress disorder. Streeter, as he prefers to be called, reached his lifelong dream of joining the special forces in the 1990s. He served with Alpha Company weapon’s platoon, 2nd Battalion, 75th Ranger regiment and deployed to many conflicts throughout the world. He has incredible memories of the time he served and literally lived the stuff Hollywood turns into blockbuster movies. But his heroic journey came at a price and left him with considerable mental and physical scars. While serving in Jordan, a parachuting accident turned disastrous. Streeter plummeted 100 feet to hard earth, resulting in broken vertebrae and a shattered left ankle. Even after the fall, Streeter tried to “Ranger Up” and continue performing his duties, not knowing the extent of his injuries. Eating Motrin like M&M’s, he continued to parachute and even went on an assault climber’s course in Alaska. Eventually, he was unable to perform his duties and parted ways with the Army in 1999.

But Streeter faced a new battle. Acclimating to civilian life with chronic pain, an unhealthy lifestyle, and evolving depression would prove nearly insurmountable.

Memories of the fall and vivid images of those suffering around the world would haunt his dreams and waking moments. Suffering from a traumatic brain injury, he began to feel very angry and paranoid with coworkers, friends, and family members. His anger would become so heightened, he would black out. He describes the paralyzing moments leading up to these episodes as if he were watching his life unfold with no control over his actions. “No one was in the driver seat. I couldn’t be reasoned with. And there was no switch to turn it off.” He lost several jobs and was on the brink of divorce. He lost his ability to breathe.

After years of emotional turmoil and taking dozens of prescription medications to treat pain, depression, anxiety, and insomnia, Streeter found a lifeline. He entered into a holistic program at the Ralph H. Johnson VA Medical Center pain clinic under the care of an inspirational physician. Dr. Robert Freeman had practiced as a primary care provider for many years and was seeing little to no results with mainstay pharmacologic therapies.

At 300 pounds and on numerous prescription medications, Streeter and his skilled team of providers had their work cut out for them. A combination of exercise, clean eating, meditation, and acupuncture had him on the right track. But Streeter’s life was forever changed after he began practicing yoga. Streeter had been breathing his entire life but he finally learned how to take a breath. Breath became a way of life. Inhale fully, exhale fully. He was able to change his breathing techniques and use the whole breath. As his core became stronger, his back pain subsided and the weight melted away. After a year of Vinyasa flow, he began to practice Astanga on a regular basis. The Astanga primary series spoke to Streeter’s comfort of routine and offered strong physical challenges. The practice helped him link mind and body through breath in a manner most accessible to his Ranger mentality. Streeter was so inspired and motivated by his journey to health that he enrolled at the Jiva Yoga Center in Hilton Head, South Carolina to become a yoga instructor. He is now member of the Yoga Alliance and active with several local and national organizations that address veterans, addiction, and PTSD. Streeter is affiliated with Bearded Warriors, Comfort Farms, and GallantFew. He has recently been invited to participate as the honorary guest speaker at the 2019 North Alabama Out of the Darkness Walk hosted by the American Foundation for Suicide Prevention.

Streeter says “Yoga is a lifestyle. The definition of yoga is the union between two things: mind and body. And those two things are connected through breath. Yoga gives us the tools to manage life experiences.” Streeter said he was faced with a choice. He could let his injuries and mental health issues define him as a victim, or he could move forward through forgiveness and self-reflection. “Society forces habits on us.” He, like many others, had been taught to be a “Man’s Man”. Suck it up buttercup. Stand up and take it. Swallow the pill. Push through the pain. “Our society views mental health issues as weakness. Society also attaches mistrust to alternative therapies such as acupuncture, meditation, and yoga. Streeter advises his students to “trust the process”. Embrace the breath.

Streeter’s favorite mantra is om gan ganapataye namo namah. Streeter explains that Ganesh (son of Shiva) is known as the remover of obstacles. This mantra encourages strength and wisdom to overcome what stands in your way.

May the rulers of the earth keep to the path of virtue
For protecting the welfare of all generations.
May the religious, and all people be forever blessed,
May all beings everywhere be happy and free.
– Mangala mantra 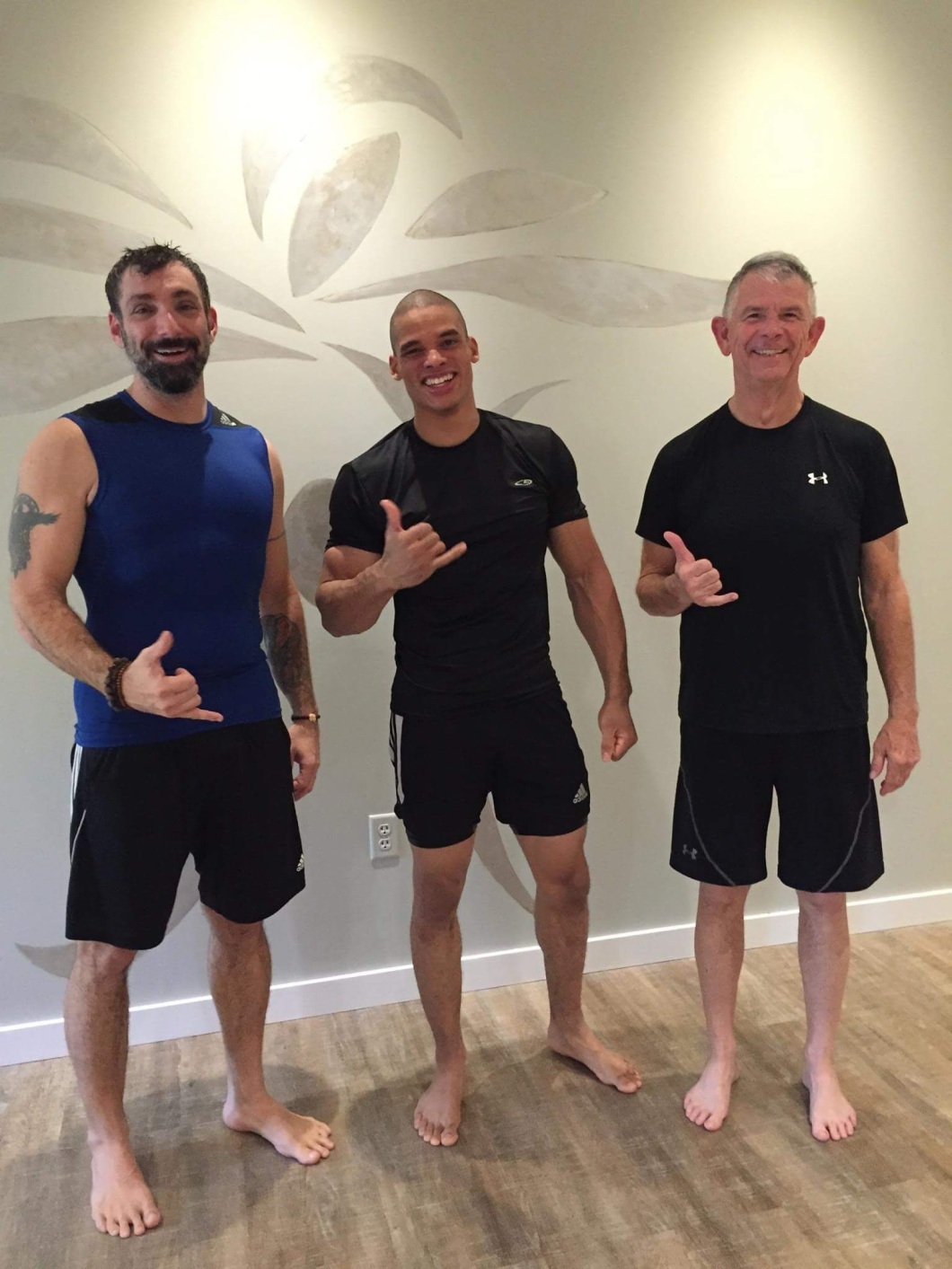 Michael Streeter (far left) is a yoga teacher and former army ranger. He currently teaches classes at Hot Yoga of Huntsville, Light on Yoga, and the YMCA. He also teaches private sessions.

This article was originally written for and published by Inside Medicine.